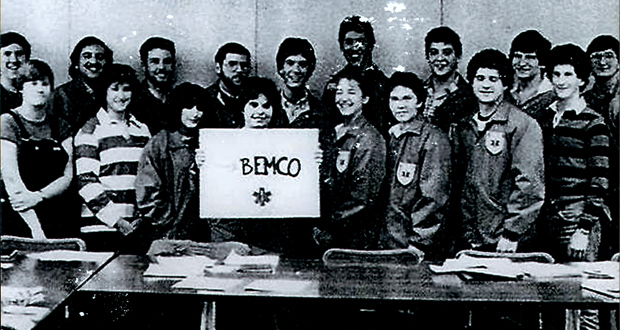 A newly established Brandeis Emergency Medical Corps (BEMCo) received its first call at the start of spring semester in 1983: A woman was in labor at the Lemberg Children's Center.

The call came from university police, via the escort service radios that the three-day-old emergency service used at the time. The handful of student volunteers, recently certified Emergency Medical Technicians equipped with little more than first aid kits, rushed over.

"All I could think was, 'Oh, my God. Where is Lemberg and what do I do when I get there?'" recalls Dr. James Meisel '85, the founder of BEMCo. An ambulance arrived first and he didn't have to find out.

Meisel conceived the idea of a campus-based emergency medical corps when he saw a student walk through a pane-glass window in his freshman year. He was already enrolled in a Massachusetts state Emergency Medical Services course that had begun running on campus a few years earlier. In the fall of 1982, he approached the university administration and the few other universities he could find that already had such an organization in place for advice.

About 750 student members and 7,612 emergency calls later, BEMCo celebrates its 30th anniversary with a gala to be held Saturday, April 20, in Sherman Function Hall. Meisel and President Fred Lawrence will speak at the celebration.

"We were young college kids and we had no experience. A lot of people distrusted us and looked at us with skepticism at best. Many students thought we were just a pre-med club," said Meisel, who in fact went on to become a physician at Boston Medical Center. He added that they also had many supporters, including then University Health Services Director Harris Faigel and longtime Public Safety Director Ed Callahan.

When chaos ensued at a general admission Adam Ant concert in the Shapiro Gym, all doubts were dispelled. BEMCo came to the rescue, treating more than 50 people for hyperventilation, intoxication, trampling and other problems.

Over the years since Meisel and founding members Doug Burd '85, David Klyde '84, Pam Malech '84 and Hugh Mainzer '84 began, the program has grown and improved in myriad ways with assistance and mentoring from university police and administration:

• From an initial $400 allocation from the Student Association to $30,000 guaranteed annual funding

• From a first-aid kit to a license to carry and dispense epinephrine, oxygen, glucose, albuterol, activated charcoal, and soon, nasal Narcan

• From a non-emergency transport car that quickly fell apart to a fully functioning and certified ambulance, as well as a less-conspicuous Ford Taurus.

It operates 24/7 under guidance of the Director of Public Safety and University Health Center.

Today, there are about 70 active members of BEMCo, all certified by the state as Emergency Medical Technician – Basic (EMT-B). They come from a variety of backgrounds and study a variety of subjects, both related and unrelated to emergency medicine. Shifts run 24 hours, during which volunteers go about their daily routines but are on-call and must always be prepared to respond.

"Many think that we're the 'drunk patrol' of the campus on weekends, but we respond to a wide variety of calls 24/7 while school is in session," says BEMCo volunteer Theresa Fuller '13. "'Sick person calls,' which include alcohol intoxication, make up only about 20 percent of our call volume. We respond far faster than regular ambulance companies, we know our community and can provide them supportive care during very difficult times"

BEMCo volunteers have responded to a wide variety of emergencies over the years, including suicides, fatal gunshot wounds and cardiac arrests. Then there are other medical emergencies that volunteers can smile about later.

"I might respond to someone having an asthma attack and the next day I'll borrow a pencil from the girl next to me for an exam and she'll say 'Thank you, I'm feeling so much better!'" says Hannah Goldberg '13. Goldberg, who was debating between going into neuroscience research or training as a doctor. Her work with BEMCo made the decision very easy, she says.

"I really like having patients and interacting," she said.

Fuller, who has risen through the ranks – from tertiary to primary, which requires additional training and at least three months of off-campus EMS experience says BEMCo has also developed a good relationship in the field. When members attend conferences such as the National Collegiate Emergency Medical Services in Washington, D.C., this year, "people are always coming to ask us questions instead of us asking them" as Meisel had decades earlier, Fuller says.

"It enriches folks on so many levels," Meisel said. "It's an important community service, just like the Waltham Group. It's a chance to give back, and it requires medical training, which adds another level of knowledge and professionalism. They are exposed to some people's most private situations and maintaining that trust and confidentiality is at the core of the organization."