Last spring, as the MIT ambulance was responding to an emergency medical call on campus, a separate emergency call was placed to the MIT Police for an ill faculty member in Building 4. As the MIT ambulance crew was responding to the first call, they heard an ambulance from Cambridge dispatched to the call in Building 4. The only problem was that the Cambridge dispatcher told the responding ambulance that the best way to access Building 4 was through 77 Mass. Ave. Imagine an ambulance crew trying to navigate a stretcher and equipment through throngs of students down the length of the Infinite Corridor at class-change time. How much time could have been saved had the ambulance parked outside Building 4 instead?

While it is exceptionally rare to get two emergency calls from campus simultaneously, this example is a good reminder of how MIT-EMS can save precious time in an emergency. MIT-EMS is staffed entirely by student volunteers, so everyone who works on the ambulance knows the campus extremely well and can respond to any location on campus quickly (typically within 2–3 minutes).

Calling 911 from a cell phone on campus will eventually result in MIT-EMS being dispatched, but it takes longer, because 911 calls go first to the Massachusetts State Police, who then notify the Cambridge Emergency Communications Center, who in turn contact the MIT Police, who then dispatch MIT-EMS. Obviously calling the MIT Police directly activates a much faster emergency response.

Partnership with MIT Medical
One of the most unique aspects of MIT-EMS is its partnership with MIT Medical. Elected student leadership manage all aspects of the service's day-to-day operations, including staffing, ambulance maintenance, CPR and other training, documentation, quality monitoring, purchasing, representation on MIT's Emergency Operations Committee, and external relations (with the City of Cambridge and other ambulance services). MIT Medical holds our state license and MIT-EMS leaders benefit from their administrative, financial, and technical support and guidance. While student emergency medical groups that provide CPR training to the community and staff details (such as large athletic events) are common, it is exceptionally rare for college students to independently operate an actual ambulance. In fact, MIT-EMS is the only student-run ambulance service in the state of Massachusetts, and one of only a handful across the country. 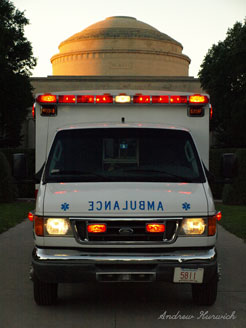 The student-volunteer EMTs staffing the MIT ambulance have the same certification from the state Office of Emergency Medical Services as EMTs on any other basic life-support (BLS) ambulance. During IAP, MIT-EMS offers a state-accredited EMT-B class that provides the training required to obtain EMT-B certification, which allows students to start working on the ambulance. MIT-EMS also provides its EMTs with additional training after the class and maintains high standards for the level of experience required on every crew.

The fact that MIT-EMS does not bill for its services has a resounding impact on access to medical care on campus. Calling 911 can feel like a big deal and is often something people feel they should avoid unless absolutely necessary. Calling MIT-EMS isn't like that. While MIT-EMS is equipped to respond to life-threatening medical emergencies such as chest pain and difficulty breathing, we're also accustomed to responding to less serious medical emergencies. Many calls are simply for patients who are ill and not feeling up to walking to MIT Medical on their own. Because MIT-EMS is free, fast, and staffed by students, people are more willing to call than they might otherwise be.

Who Uses MIT-EMS?
When picturing a student-run ambulance serving a college campus, many assume that most calls are for intoxicated students. Nothing could be further from the truth. During the 2009–2010 school year, MIT-EMS responded to about 400 medical emergencies on campus; fewer than 10 percent were alcohol related. We more often get calls for sports injuries, fainting, and general illness. In addition, MIT-EMS also ran about 200 non-emergent transfers of patients to and from MIT Medical and other local hospitals last year. About 25 percent of the patients transported by MIT-EMS were current or former MIT faculty and staff.

As MIT-EMS enters its ninth year, it has become a well-known image around the MIT campus. In 2009, MIT-EMS received the Karl Taylor Compton Prize, the highest award given to an MIT student or student group. The award is given "to recognize extended contributions in promoting service and high standards at MIT." It's most gratifying that students and faculty alike have come to recognize and appreciate the valuable service we provide. For example, one patient wrote, "They were terrific; they were professional and serious, careful and respectful, but also fun and enthusiastic. It really could not have been better."

MIT-EMS has also been recognized by the larger community. A Cambridge city official remarked in a letter of commendation after the 2006 fire at 1 Broadway, "MIT-EMS seemed to be everywhere." Our efforts also led to MIT becoming the first college campus in the country to be declared a "Heartsafe Community" by the American Heart Association.

As MIT Medical prepares to close its Inpatient Unit, modify its hours for Urgent Care, and open the new Community Care Center, MIT-EMS will be an integral part of this new health care model. As MIT Medical transitions away from offering overnight urgent or inpatient care, MIT-EMS will play a critical role in transporting MIT affiliates to other medical facilities.