Story and Photos by Diane Knich
The Post and Courier 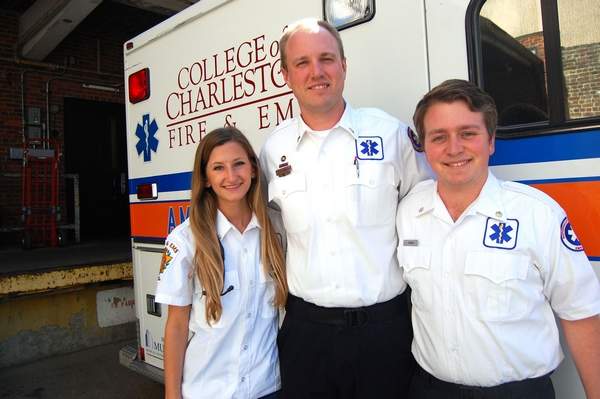 College of Charleston EMS volunteer Lisa Petruncio wasn't sure what she would find when she responded to a recent call about an accident in a campus laboratory.

When she arrived on the scene of the freak accident, a patient had a knife lodged at least two inches deep into his arm. "It looked like a Halloween costume," she said.

Petruncio, who is a senior, is one of 23 students who volunteer in the campus EMS program, which has been responding to accidents, injuries and medical emergencies on the campus since 1995. The team's work was recognized last month when they were named Organization of the Year by the National Collegiate EMS Foundation. It's not an easy volunteer gig.

Students have to complete a 210-hour course, then commit to volunteer at least five hours each week. Most put in many more hours.

Petruncio and Logan Herbert, another senior, have been volunteering with program for the past three years. They each volunteer 30-40 hours per week while being enrolled fulltime in the college's Honors Program.

Herbert said he has responded to many sports injuries as well as car, bicycle and skateboard accidents. And he's seen more than his share of alcohol- and drug-related
emergencies.

One of the most serious things he has seen was student who was unconscious from a drug overdose. The team didn't know what the student had taken, he said. They had to try to get information by looking around his room for clues, and talking to people who might have recently been with him.

Rick Krantz, Chief of Fire and EMS at the college, said 267 of the country's colleges have student EMS teams, but the College of Charleston is the only school in the state with the program. Clemson University is considering starting one and modeling it after the college's program.

Krantz said the college's program started in 1995, when a group of students pushed for it after a student died from a heart attack in a dorm. An EMS team couldn't have saved that particular student, he said, but his death got some students' attention and the program was launched.

Its been improving every year, he said. Students are getting more extensive training, and in 2011, the program got its own ambulance.

Don Lundy, director of Charleston County's EMS program, said the college's program works well with the county.
The students are the first-responders, he said. They stabilize patients, begin treatment and do basic life support.

They know the campus and the culture, so they can respond more quickly, he said.

And injured students respond well to them. "It's students helping students," he said.County EMS workers also respond to campus calls, he said. They take over in situations that require advanced life support skills. And they transport students to the hospital when necessary.

Lundy said he's not surprised the college's team won the national award. "They are professional, compassionate caregivers," he said.

Over the years, he has hired about 40 of them after they graduated.

One of those is Greig Samuelson, a former student volunteer who now works full-time for the county and part-time as the college's EMS compliance and training coordinator.

The first serious call he responded to when he was a student involved a diabetic man who was unconscious and having a seizure. He did what he could for the man. Then he watched as Charleston County EMS workers revived the man after they had arrived on the scene. "I saw him fixed," Samuelson said. "That's when I got hooked."