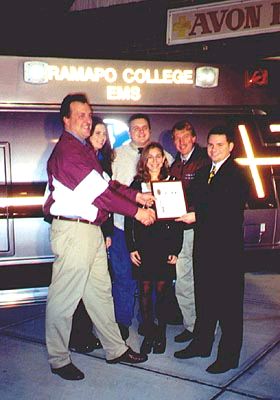 "With all the ups and downs in this crazy EMS world we live in, it's nice when there's good news to share. Occasionally, the good guys actually win. I'm very proud of the story that follows, and I wanted to share it with the group."

In mid-September 1998 NCEMSF Vice President, Scott Savett, was contacted through one of NCEMSF's corporate sponsors. Rick Vomacka of Emergency Products and Research had been contacted by Chris Bonin of Avon-by-the-Sea (NJ) ambulance squad. This volunteer ambulance squad had purchased a new ambulance, and their 1986 Type II ambulance was available for sale, with very low mileage. Chris "figured it could go to a paid transport service or some organization that might kill it within a year or two and we could recoup some equity out of it, and that would be that. Whatever we could get for the rig would offset part of the cost of the new rig."

Given its low mileage, good condition, small size, and low price, Rick and Scott thought the ambulance would be ideal for a college squad. To announce the availability of the ambulance, Scott used NCEMSF's e-mail discussion group (NCEMSF-L), and also specifically directed it to Ramapo College, a small state college in NJ.

"It turned out that the folks at Ramapo were in the initial stages of forming a campus EMS group and were considering some kind of first response or transport BLS service. Both Scott and I reached out to Dave Bacall, the student driving the formation of the Squad at Ramapo and his response was enthusiastic. The timing in his plans to form the squad was perfect. I drove the rig up to Ramapo, and you would have thought I was Santa at Christmas by the response I got. It's been a long time since I've seen the magic in the eyes of EMSers that a new rig can bring. We've all progressed to a point in our EMS career where a rig is just a rig, but do you remember the excitment a new rig generated back when we were oh-so-green? It was nice to see that excitement again in a groups eyes."

During the visit, the ambulance was shown to the Dean of Students, the Director of Facilities, the Director of Public works, and two school mechanics. A grass roots effort swelled at the college to drum up the funds necessary to purchase the rig. To top things off, turns out Avon-by-the Sea First Aid Squad's color scheme on the ambulance matched the colleges colors perfectly. They wouldn't even have to change the paint job.

"Other bids, some more attractive, were received for the ambulance. Dave from the college wrote an impassioned letter to my squad that requested that Avon accept Ramapo's humble bid. To the credit of my squad, they realized that they had a chance to really do something good here. In a time when we often hear the bad news about squads having so much trouble that they become ineffective or are forced to disband, the Avon squad recognized they had the opportunity to plant the seeds for a new EMS organization. I'm very proud to say that the squad chose to accept the bid from Ramapo, and our ambulance will be the first rig used by that brand new volunteer EMS organization. The Dean of Students delivered the check to me a couple of days ago, and the school is in process of getting the title and registration changed and securing license plates from DMV. We hope to have the transfer ceremony later this week."

"The rig sale included the stretcher, and the squad also voted to give the Ramapo group some backboards, a stair chair, and other old but useable equipment and we'll stock the rig with some soft supplies to get them started on the right foot. Our neighboring Squad and mutual aid partner in Belmar, NJ is also going to donate some equipment and supplies. Ramapo would probably appreciate some donations from wherever, so if any of you have some boards, O2 equipment, blankets, a reeves or scoop, soft supplies, anything, they'd probably appreciate your generosity."

Chris finished his letter by saying: "I was on a college squad at Rutgers U. so many years ago, and the memories from that time are among my best. Other squads benefit from the college squads too, since many students whose first affiliation are with the college squad return home and get involved with their hometown squad. I hope the Ramapo squad is as rewarding to the present crop of students as RU was to me. I had the opportunity to meet some of the prospective studen