When every second counts, the RPI Ambulance team relies on Slack to deliver crucial information and medical attention to the local community

In a medical emergency, calling 911 should get you an ambulance as soon as possible—no matter what. That’s the belief at RPI Ambulance, a collegiate medical service based in Troy, New York, offering basic life support and emergency transport. Shifts are staffed by student emergency medical technicians from Rensselaer Polytechnic Institute, also known as RPI, 24 hours a day, seven days a week, throughout the school year.

But when unreliable communication channels began threatening the team’s ability to respond immediately to calls, RPI Ambulance enlisted Slack to improve intra-agency communications while continuing to serve the Troy campus and surrounding community.

Until recently, the county-distributed pagers that RPI Ambulance members were using had become unreliable. Radio frequency signals were spotty in the hills and within concrete and steel buildings.

RPI Ambulance tried buying and maintaining its own dispatch equipment, but that proved expensive and lacked good range. Another workaround with cellphones proved inadequate—text messages from the county dispatcher were delayed by 30 seconds or more, depending on cell service, email servers or other factors.

“We once had a text come in eight minutes after we were on scene,” Dan Bruce, an RPI alumnus, paramedic and developer at RPI Ambulance, said at this year’s Slack Frontiers conference. “We were already talking to the patient and doing our assessment, so that was unacceptable.” 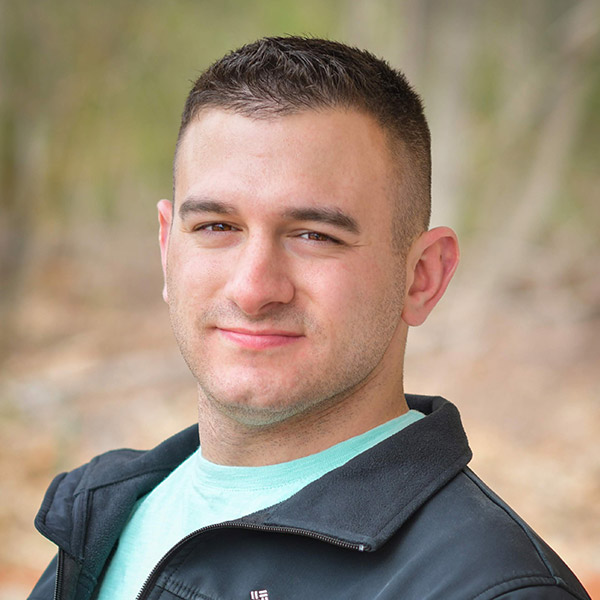 “In a field where seconds count quite literally—it could be a matter of life and death—instant notification of emergency calls within Slack has helped our membership respond to incidents.”

So RPI Ambulance added Slack to its mix of communications, custom-designing a system to suit its needs. First, the team created a Slack app integration called AmIResponding?, or AIR, which uses a microcomputer to listen to the county dispatch’s emergency medical services (EMS) radio frequency. When dispatch wants to notify a firehouse or EMS agency of a call in their area, it first broadcasts the department’s unique tones over the dispatch channel to indicate the incoming call is for them. 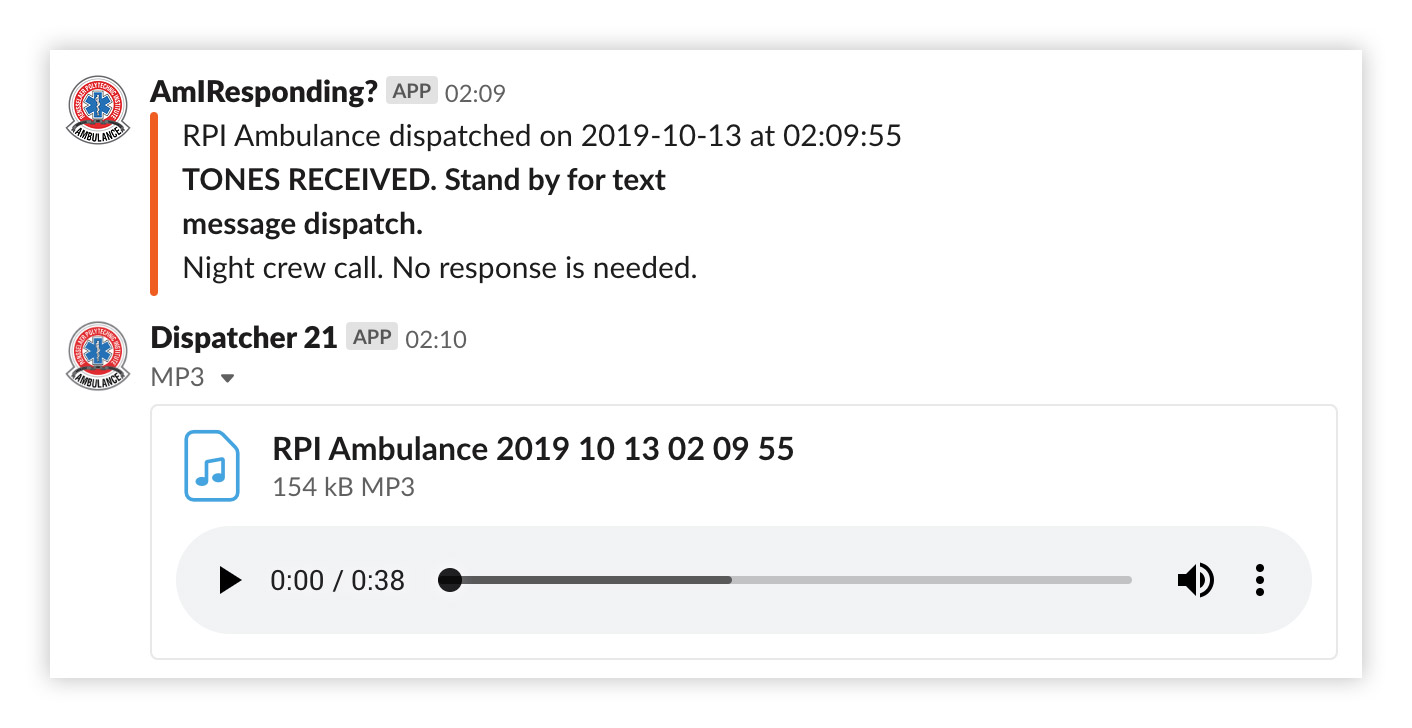 When RPI Ambulance’s tones sound, AIR’s microcomputer picks them up and relays the dispatch notification to an integration server, which passes along a “tones received” message to two Slack channels: #responding for on-call responders, and #dispatch for non-credentialed, observing members. On-call members in #responding are prompted to respond “yes” or “no” to the call. 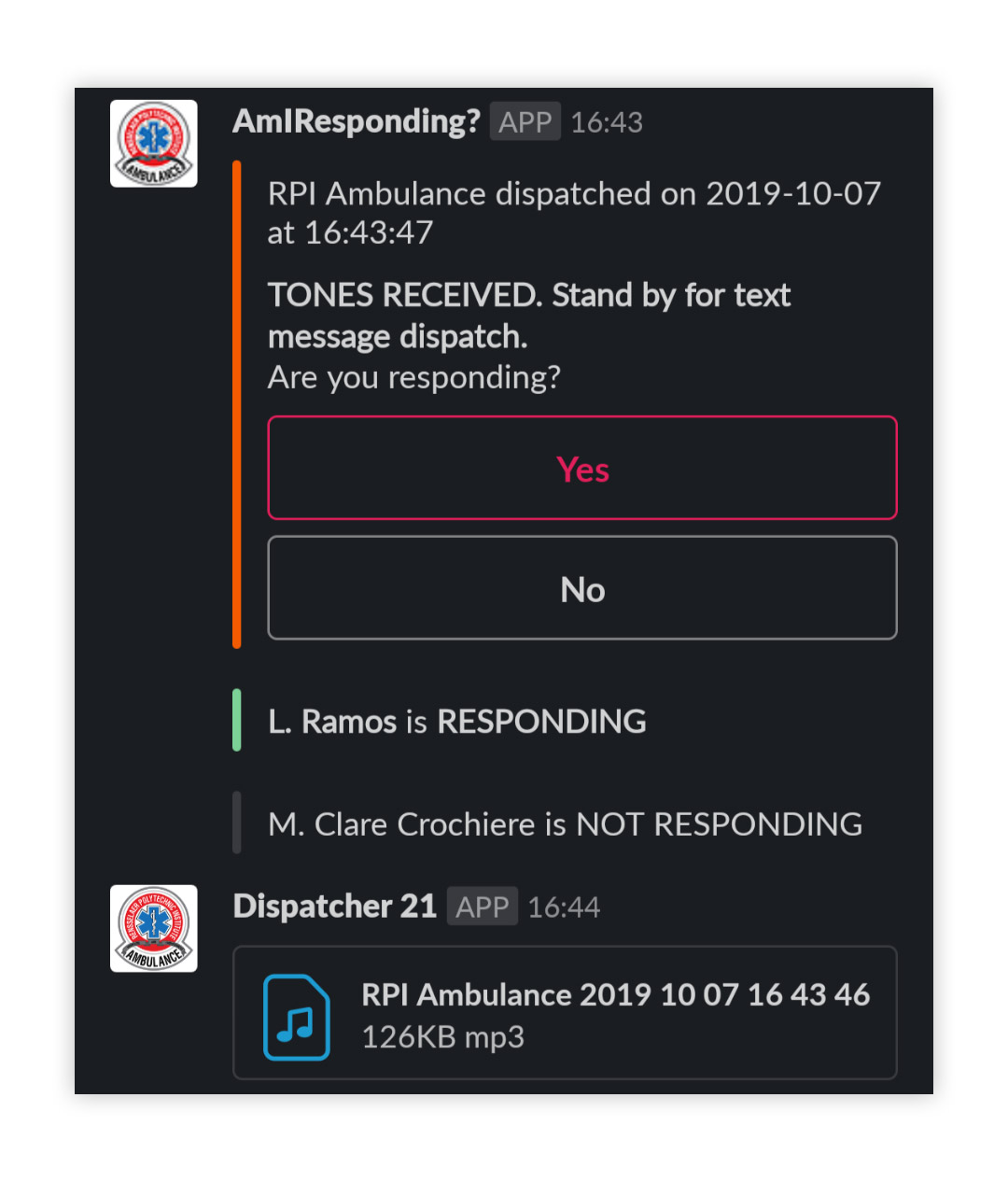 AIR then records and relays the dispatch message—which follows the tones about 30 seconds later—with details about the nature of the call. These notifications are each sent from dispatch to RPI Ambulance’s Slack channels almost instantly, 1.5 seconds, to be exact.

“Before the dispatcher even starts talking over the radio, we have a notification in our Slack channel,” Bruce says. By the time the actual message comes in, the crew members have already opted in on the assignment, know who they’ll be working with, and are en route to the garage. And the entire squad already knows who’s answering the call, so they don’t all show up at once.

“In a field where seconds count quite literally—it could be a matter of life and death—instant notification of emergency calls within Slack has helped our membership respond to incidents,” Bruce says.

RPI Ambulance’s development team has also built additional Slack integrations to cut out margins of error, making a big difference in its emergency response services. One such integration functions much like AIR, but with RPI’s campuswide emergency alert system instead of a county dispatch center.

Like most universities, RPI’s mass-notification system, RPI Alert, shares important information to everyone at the school through PA systems, phone and SMS, email and on the university’s website. However, mail server volumes and cell reception problems mean these notifications about police activity, road closures and other goings-on around campus and in the greater Troy area are often delivered to students, faculty and staff with extreme delays. A message might be sent immediately but not reach email inboxes or cellphones until almost an hour later.

So RPI Ambulance’s developers built an integration that trawls the university website and other public RPI Alert feeds every 10 seconds. It then immediately drops into a Slack channel any new messages it finds and tags @channel, alerting all members in the channel and delivering crucial context to first-responder teams.

“We could theoretically give the university a log in for our Slack channel, or have the county give us an informational dispatch or something similar,” Bruce says. “But why should we double the work for somebody else if we can build a way to work with the data that already exists and put it into Slack? Especially in a format that looks good, makes sense to us, and comes in the order that we’re expecting it every time.”

After emergency medical services, training and community education, RPI Ambulance’s highest priority is the development of open-source tools that will make emergency services faster and more effective. For instance, the agency created /whoson and ChoreBot Slack integrations that announce shift schedules and the daily chore rundown.

“If we want a service, we usually build it ourselves,” Bruce says. “And Slack has proven to be a really solid platform for our use case. Because EMS is worldwide, right? And so is Slack. Communication happens everywhere.”