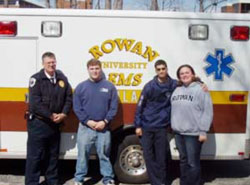 The ring of the beeper carried by Rowan students who volunteer for the EMT service has a distinct sound: it is a loud, persistent sound that is grating on the ear, and is followed by a dispatch telling the EMT what is happening and where. Whether this goes off at a convenient time in the afternoon, or late at night while the student or his/her roommates are trying to sleep, there is no ignoring the alarm.

" It's so loud. There's no way you can sleep through it, it's annoying as hell," said Lisa Van Kleef, a senior who serves as first lieutenant in the EMS squad.

Van Kleef is one of approximately 20 members in the EMS squad who volunteers to serve the Rowan community. The squad has just reached their 25th anniversary, making it the oldest still-running squad in the state.

The EMS squad is entirely student run, with 11 of its 20 members being fully active. Each of these members carry a beeper with them everywhere and rotate all-night shifts, or duty nights, making the service operative 24/7. On these duty nights, which run from 6:30 p.m. - 7:00 a.m., there must be at least two people on duty: an EMT and a driver. The people on duty usually carry on their lives as usual, but are required to be within 5 minutes of Linden Hall, which is the location of their lone ambulance and the other vehicle, a 1996 Chevy Lumina, which was provided by the University.

Kedar Mahajan, sophomore biochemistry major from Parsippany, serves as the captain of the squad and has been an EMT for three years. He received his certification while in high school. Studying to be a doctor, Mahajan explained that he didn't want to wait until he could actually get into medical school until he could practice medicine, and became an EMT partly out of a need to get involved.

" I'm impatient. I don't want to wait until med school until I can actually take someone's blood pressure," said Mahajan.

In working for the squad, Mahajan described it as a community akin to Greek organizations on campus, and said he considers his fellow EMS workers as brothers and sisters. He also described the experience as being very exciting, bringing an adrenaline rush with the job.

"[It's] addicting. [Not doing it] drove me nuts. It becomes part of your life. Whenever I hear a siren, I look up and it gets your adrenaline going. You want to be there, you're gonna want to know what's going on," he said. "I can see myself not being a captain, but I can't see myself not being involved with EMS. If something happens, if someone gets hurt, I want to be there."

Van Kleef, a senior math major from Elmwood Park, serves as the first lieutenant and also got her EMT certification last year in high school. She is now in her fifth year of being an EMT. Her involvement stems from her experiences in being a lifeguard, and then wanting to do something else related to medical services.

Her decision to volunteer for the EMS squad came from her father, who volunteers his nights, balancing his time as an EMT with a full-time teaching job. This is something that she wants to continue after graduation.

Van Kleef said that part of the experience involves giving up certain personal freedoms associated with college. On duty nights, she isn't allowed to go to the movies, drink alcohol, or go anywhere on campus since she has to be on alert at all times. However, she explained that the rewards of the service, which include potentially saving someone's life, more than make up for it.

"If you wake up at three in the morning and help someone, you're lucky to get a thank you. But what makes it count is when people really appreciate what you're doing. A thank you makes it all worth it. It makes you feel nice and warm and cuddly inside."

A junior physics major from Upper Township, Gary Guyon serves as the Second Lieutenant and has been a certified EMT for one year. Guyon explained that he became interested in being an EMT through his cousin, who is an air medic now. As a result of his being an EMT, he has decided to change course entirely and become a Physician's Assistant (PA), which is a Master's of Science program and has very little to do with physics. Guyon explained that his experience in the service made him realize that the medical field is where he wants to be.

"Trying to help another person gives me an adrenaline rush... I go to bed every night knowing that I've helped somebody today," said Guyon.

The squad has a high turnover rate due to graduation, and is therefore periodically on the lookout for new members. However, they limit the number of people to 25, due to lack of resources. The faculty adviser is Rich Wadleigh.