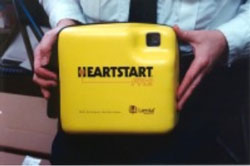 A once complex piece of medical equipment will soon be as common and accessible as fire extinguishers as the result of a national effort to equip communities with simplified life-saving equipment.

The Automatic External Defibrillator (AED) is a machine that provides an electric shock to the heart in instances of malfunction or heart attack. Until now the machine was most commonly seen on television shows like “ER” and “Chicago Hope” where actors posing as doctors would charge up paddles and shout, “Clear,” before administering a shock to a heart attack victim.

However, this life saving equipment is now simplified to a machine that the American Heart Association says even a three-year-old can use. Through the aid of a state grant, the Rowan Emergency Medical Squad has just received one of these lifesavers as well as two training units for faculty and students who wish to learn how to use it. 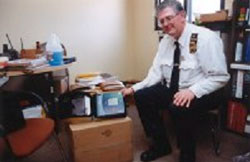 According to Associate Director of Public Safety Richard Wadleigh, the grant is open to all squads in the state. Rowan is among the first in the South Jersey area to receive the $3,500 grant to purchase the AED and training units.

Though statistically, heart complications are more common in older adults, Wadleigh said there is still a need for an updated AED on campus.

“We’re (Rowan) a community like any other,” said Wadleigh. “If [the squad] doesn’t have one available, we are not meeting peoples’ needs.”

Though the squad already has a defibrillator, Wadleigh says it is an older model, purchased in 1996, and an additional machine is ideal, maybe even necessary, due to the potential for heart difficulties to occur on campus.

“Four [AEDs] would be an ideal situation ... five, even better,” Wadleigh said.

He added that these extra machines could be placed in target areas such as the Recreation Center where there are people working out, some of which are on a cardiac rehabilitation regimen. The simplicity of the machine, Wadleigh said, is what would make this plan possible.

“People can learn to use this equipment with very little training,” he said.

Unlike the large cart seen on television, the AED is portable — about the size and weight of an average hardcover textbook. The rectangular machine consists of a screen, two buttons and a port.

In place of paddles, two pads with wires attached are included with the unit. When the green button is pressed, the AED turns on and then prompts the user through the procedure, beginning with where to place the electrode pads on the victim.

What makes this machine safe enough for a child is its diagnostic function. More than just an electric jolt, the machine assesses the heart and recommends whether the victim can be shocked and at which level. If a shock is recommended, the machine charges itself to the appropriate number of Joules (measure of electricity), instructs the user to stand clear and press the second button — a large orange button with a lightning bolt-like symbol on it.

After shocking the victim, the machine will offer another diagnostic on the condition of the heart and instruct the user whether another shock is necessary.

“The clock starts ticking the moment complications or an accident occur,” Wadleigh said. “This makes response time crucial ... the AED can give us more time.”

Wadleigh said the qualified Emergency Medical Technicians on the Rowan squad will begin training in the use of the new AED after spring break. In the Fall, he said Public Safety plans to offer training to faculty and students.

Anyone interested in training in Cardiopulmonary Resuscitation (CPR) and the AED can contact the EMS office at x4292 or Safety and Emergency Medical Services at x4567.