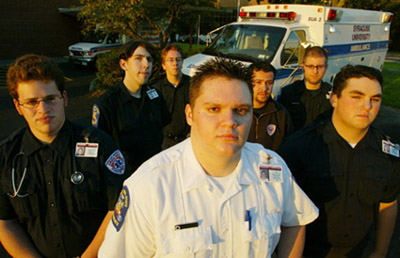 Students braving the campus streets can find comfort knowing that if there's trouble, the best ambulance in the state is only minutes away.

Syracuse University Ambulance was named Emergency Medical Services Agency of the Year by the New York state EMS council. The SUA staff is made up of about 70 students and alumni, who are all volunteers.

"The volunteers are a dedicated bunch," said Tim Perkins, current executive director of Central New York's EMS council. "They do a good job of making sure the ambulance is fast and gets there on time."

Perkins, a former manager at SUA, nominated the organization for the award. About eight other agencies were nominated on the regional level, and the state picked SUA as the finalist.

"SUA is one of the best structured and run college-based EMS," Perkins said. "It's their 30th anniversary, and I thought they were worthy of being nominated."

Started in 1974, SUA is available 24 hours a day, seven days a week. Some students spend up to 40 hours a week volunteering, said Heather Will, SUA manager.

"The recognition isn't just for today's members," said Will. "It's for every member in the last 30 years that has brought the ambulance service up to the level it is today."

Will said any student can volunteer, regardless of experience of medical knowledge. EMT and drivers are required to learn at least basic CPR, and some volunteers take training above that, Will said.

"We do a lot of training," said Zach Blaine, vice president of SUA. "We take on people with no experience and we train them up."

Blaine, a junior TRF major, started with SUA his freshman year after seeing their booth at an involvement fair. He now works as a crew chief and spends up to 30 hours of his time with SUA each week.

"I'm amazed at how they could balance volunteer time with other responsibilities," Perkins said. "I'm impressed at how they make it work."

On a given night, a call comes into to the dispatcher who then pages an ambulance over the radio, or rings the bell in the station to alert the crew members, Blaine said.

The dispatcher will fill the crew in on the problem, information about the call and the priority level, he said.

A priority one level is a critical medical situation that requires a certified paramedic, Blaine said. In such cases, SUA calls Rural-Metro paramedic services to assist.

A priority two describes a much more common complaint, such as an ankle injury, which SUA responds to with lights flashing, Blaine said. A priority three is less serious, such as a person just feeling sick, and requires no lights.

The drivers are required to know the area to ensure quick response time, Blaine said.

"We're always driving with somebody who knows the area," he said. "We can get from our office on Waverly to Winding Ridge on South Campus in three to four minutes."

SUA answers calls to off-campus students, too, Blaine said. Their response area covers from Comstock Avenue to Westcott Street on the east side, to East Genesee Street on the north side, and all the way to Drumlins Country Club.

In addition, SUA is also trained in responding to mass casualty incidents in the region, Will said, including a dangerous ice storm and a train wreck in East Syracuse.

Their award will be presented in October at the 2004 Vital Signs Conference in Buffalo.

"It's a richly deserved honor," Perkins said. "I can't wait to go to Buffalo to present it."