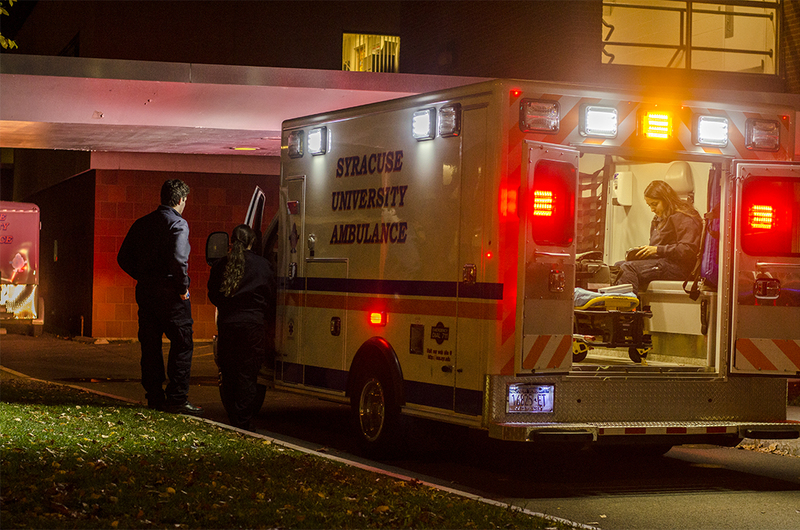 By Charlie Sawyer
The Daily Orange

The blood drive will be held in Schine’s Panasci Lounge on Tuesday. Senior psychology major Megan Panebianco, SUA’s special events supervisor, said it’s the most important event of the week.

“Because of all these things happening in the world, the Red Cross is low on blood,” she said. “Hospitals are running out of blood, which never happens.”

SUA will showcase its ambulances on the Quad and have an open house starting at 12:45 p.m. Wednesday. Students interested in joining the organization can meet SUA supervisors and student employees there.

In the future, Paul Smyth, EMS manager for SUA and Health Services, said he hopes to expand offerings and events during EMS Week, such as free CPR certification courses for students.

“I think it’s important to get the word out … get some educational materials out and get the recognition out to the campus community (about) what SUA is, why we’re here and what we do,” Smyth said.

SUA was founded in 1973 by a small group of students with first-responder training, Smyth said. At first, the organization had no vehicles or specialized equipment, he said. But it’s grown since then.

Senior finance and accounting major David DuPont, who works as an SUA field supervisor, said a typical shift for him starts at 5 p.m. and ends at 5 a.m. the next day. As a supervisor, he’s on call the entire shift, waiting in the organization’s Lyman Hall office.

“We respond to any calls that are in our service area, which is typically wherever an SU student is,” DuPont said. “Which could involve anywhere on campus, to the Euclid neighborhood to South Campus … even sometimes into the city to, say, the Warehouse. As a supervisor, I’m basically the one responsible for making sure the best care possible is happening on those scenes.”

Panebianco said in addition to responding to calls, her job as special events supervisor requires her to arrange standby services at sports games and other big events.

New employees apply to the program at the beginning of semesters and, within a year, are required to pass an exam to become a state-certified EMT.

“EMS Week is an opportunity for outreach and to make people feel more comfortable around us,” DuPont said. “Some people are scared to call an ambulance because they’re thinking, ‘It’s going to get me in trouble. It’s going to cost me money. My parents are going to be mad at me.’”

The cost of using SUA emergency medical transport, though, is included in the standard Health Services fee, according to the organization.