HomeNewsIndividual Squad NewsUniversity Of Massachusetts Lowell NewsOne Call Does It All 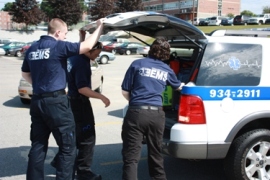 At first glance, you might say there's nothing unique about UMass Lowell Emergency Services--a university-based EMS provider in Lowell, Massachusetts. But when you get past the routine, day-to-day operations, you realize that their system of alerting EMTs in the event of a large-scale event deserves a second look.

Three years ago, says director of operations, Matthew Ricci, UMass Lowell EMS signed on with Call-Em-All, a web-based provider of automated voice messaging that allows them to call in resources for out-of-the-ordinary emergency situations.

"With this system, a dispatcher or an EMT can call a single number and record a voice message to the service, which immediately calls a list of 35 numbers in our system and plays back the message that I or someone else recorded," says Ricci. "What it really does is save time and resources to activate off-duty personnel under what are usually extenuating circumstances, like a natural disaster or an incident in the city that increases call volume and necessitates adding personnel. We also use it to call in EMTs to work the annual marathon, which can result in a lot of patients."

In December 2009, the university EMS system used automated voice messaging to alert its EMTs after a New England ice storm cut off power to more than a million homes and businesses, closed schools, and knocked down trees and power lines.

"In the 2 weeks following the storm, the city established shelters throughout the region for people who had been displaced from their homes and had nowhere to go, or were elderly or less well-off financially," says Ricci. "We used this program to notify our EMTs, who were very quickly able to help staff the shelters at a time when the city's resources were overloaded."

The Call-Em-All system has a number of features that made it attractive to UMass Lowell EMS, says Ricci.

"If the call goes out from a dispatcher or office-based operation with computer access, they can pull up account information on a web site that shows a chart of when the call went out, who received it and who let it go to voice mail," he says. "Obviously, the disadvantage with that is you have to be in front of a computer with Internet access, which our trucks have, but we usually don't monitor. Most often, we either provide instructions to go to a staging area if it's a large-scale incident, or we instruct them to text my phone and respond whether or not they're coming in. That puts the burden on the person receiving the message to get me the information instead of me having to collect it."

UMass Lowell EMS's primary coverage area is the University of Massachusetts Lowell and the contiguous area, but in large-scale situations, they respond to both city and regional incidents and serve as the primary triage team, says Ricci.

"We stay on site the entire time to assess and treat patients, so ambulances coming in are able to pick up a fully packaged patient and leave," he says.

The system has only been used for three or four actual emergencies, he says, but it also comes in handy for training sessions.

"There are responders who have worked with us in the past who want to come in to assist with training, as well representatives from other departments in the region, and we use voice messaging to notify them when and where training will take place. The good thing is, we're able to filter the message so it only goes to the pertinent people and prevents it going to administrators who only want to get the message if it's a real emergency."

The only other agency Ricci is aware of that uses the Call-Em-All system is Arlington (MA) Emergency Management Agency, whose director of field operations, John Casey, is Ricci's partner in directing the program.

"John originally made the recommendation to me," Ricci says. "The university uses its own notification system, but they've had a lot of problems with it and have gone through multiple revisions, so we're pretty comfortable staying separate from them."

Another big attraction of Call-Em-All is that it's a pay-as-you-go system, where you buy "credits" based on the number of minutes you use, says Ricci.

"It's a really low up-front cost--less than $100 annually," he says. "Our budget isn't very big, so we try to refrain from entering contracts or services that have subscription fees. For the return we get on this service, it's invaluable."

For more information on UMass Lowell EMS, go to www.uml.edu/uml_ems. For more on the messaging service, see: www.call-em-all.com.