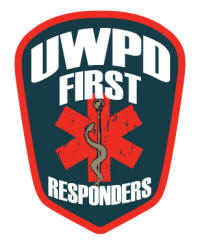 On September 1, 2009, the Wisconsin Department of Health Services approved the UWPD First Responders as a Medical First Responder level organization. This is a very unique group that is supplementary to the UW-Madison Police Department.  The group is unique due to the fact that the leadership of the group is made up of UW Students. While the Police Department maintains oversight and guidance, the students fill many of the leadership roles inside of the organization. This group was not formed overnight and it actually took the student organizers two years to make it a reality. Now let's take a look at the history and what these students have achieved.

In 2007, sophomore Emily Anstadt started a University wide student group known as Student Emergency Medical Services (SEMS). This is an interest group for undergraduate students.  The student organization attracted over 80 members in its first semester, and has continued to attract new members through unique hands-on learning and volunteering opportunities.  Through a membership in Student EMS, students can take a free American Heart CPR course, attend EMS related trainings, shadow paramedics, work on campus safety projects, and volunteer at EMS events.   About half of Student EMS members take an Emergency Medical Technician training class through a technical college before or during their undergraduate career.  Many students volunteer as Emergency Medical Technicians (EMTs) with services in Dane County, but some are unable to use their license because of a lack of transportation to neighboring communities. 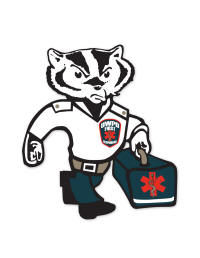 Early in 2008, Anstadt partnered with freshman Katie Egan with a shared vision of starting an emergency medical service organization on campus to build a safer campus community and to create a new opportunity for students with an EMT license.  During a meeting with Associate Dean of Students Kevin Helmkamp, Anstadt and Egan were directed to the UW Division of Recreational Sports as a possible partner.  Recreational Sports currently had a void in on scene emergency care for their athletes and supporters, and felt this service was needed at events which can attract 200-2,000 students and fans.

With a team of other certified EMTs, Egan and Anstadt educated themselves in the steps needed to become a licensed service under the State of Wisconsin.  UW Hospital Emergency Department physician Peter Falk enthusiastically supported the group and agreed to serve as the founding medical director.

The team of EMT’s continued to look for support for their first responder group and asked about a possible partnership with the UW-Madison Police Department. The team partnered with Lieutenant Michael Newton on past projects and felt the police department was a logical place for the group to fit within the University.  The team of students met with Chief Susan Riseling and presented their vision of the group and partnership.  After the presentation, the group was welcomed into the organization, thus acquiring its name of UWPD First Responders.  The founding advisory committee includes Katie Egan, Service Director; Emily Anstadt, Infection Control Officer; JP Geygan, Quality Control; Jon Letko, Training Officer; Peter Falk, Medical Director; Michael Newton, Unit Commander; and Brandi Schaefer, Unit Coordinator.

The UW-Madison Police Department First Responders is an all volunteer group that began operations in September.  Although all members will be licensed at or above the EMT-Basic level, the service will function at a First Responder level and will not transport patients.  The First Responders will work closely with Madison Fire Rescue in the care of patients who need transport to a local hospital.  The service will operate at special events across campus, including Recreational, Club sporting events and events staffed by the UW-Madison Police Department. The group hopes to integrate into the greater UW community by recruiting not only undergraduate students, but also graduate students, faculty, and alumni who are currently licensed as EMTs. For more information you can email the group at UWPDFR@mhub.uwpd.wisc.edu.