Students will soon be among the first to respond to campus emergencies as ASU's Health and Counseling Student Action Committee prepares to launch Student Emergency Medical Services.

The student-run program will provide an emergency-response team based out of the Tempe campus' health center starting in early November. Student medical technicians will respond to emergency calls on campus and begin medical treatment before paramedics arrive.

Nursing sophomore Sean McMullen helped develop the program at ASU as a way to help students and medical crews.

"We're not going to replace the fire department," McMullen said. "We just think we could get there first."

He said the program is common among universities throughout the country, but not in Arizona.

"We're one of the few schools that doesn't do it," he said. "But we'll be Arizona's first university that does."

All students in the program will be trained and certified emergency medical technicians.

Crews of two or three EMTs will be on call at any time. They will receive calls from the Tempe Fire Department and respond immediately.

McMullen said response crews would go straight to the scene and start treating patients. Paramedics will take over when they arrive, and the student response crews will aid them however possible.

McMullen said he hopes to have student crews respond to smaller cases on campus, such as minor injuries, as an added service to ASU students.

"That saves them on an ambulance bill and a hospital bill," he said.

McMullen said the program is still in its early stages but should be fully running in November. He hopes to have 15 to 20 EMTs working on a regular basis.

"We'd love to get enough people to do 24-hour service," he said.

"Most of our projects are geared toward making our students more aware of health services," Raub said, she said.

But the new program will directly with aid students in medical emergencies.

"They will be working with us to oversee and make sure everything is going the way it's supposed to," she said.

"We're looking at growing and getting it to where more students are involved," she said.

"It's a good tool to use later on," Raub said. "There are huge benefits to volunteering your time to do this."

Reach the reporter at adam.sneed@asu.edu. 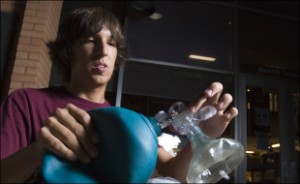