By Eleanor Hildebrandt
The Heights

“This is over. Something happened at the finish line.” 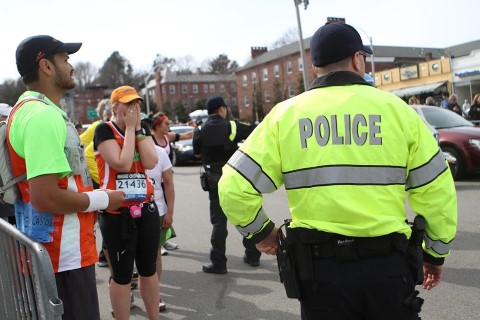 On the afternoon of Monday, Apr. 15, around 3 p.m., the crowd at Mile 21 was considerably thinner than it had been just hours earlier. The stream of runners passing by the Boston College campus had narrowed to a trickle, but students were still leaning over the guardrails by St. Ignatius Church, yelling encouragement and offering high fives. Friends, family, and local citizens had gathered on the other side of Commonwealth Ave. to do the same. One or two people had heard a sound like thunder a few minutes earlier, but no one thought much of it—the weather was turning from April sun to rain, perhaps. The Boston Marathon went on.

Suddenly, phones started ringing and beeping, and the news began to spread. At 2:50 p.m., two bombs had exploded on Boylston St. by the marathon finish line in Copley Center. There were multiple injuries. No one knew whether or not anyone had died.

Police officers in attendance consulted their radios, then moved out into the middle of Comm. Ave. to halt the marathoners. “This is over,” one officer said. “Something happened at the finish line.” A female runner crumpled to the ground, sobbing, as the officer continued, telling students that no one was being allowed into the Boston area, and the road slowly cleared. “We don’t know what’s going on,” he said. “They just told us to close down the race.”

Throughout Monday afternoon and early evening, downtown Boston was the scene of violence and destruction. Boston Police and the FBI shut down the scene, investigating suspicious packages along the marathon route. Public transportation was temporarily halted. Cell phone service was suspended. The Boston Globe has since reported that three people—8-year-old Martin Richard from Dorchester, 29-year-old Krystle Campbell from Arlington, and Lu Lingzi, a Chinese graduate student from Boston University—died as a result of the attacks, while at least 174 people were injured and received treatment in area hospitals.

“We’re going to work through this, no matter what.”

Meanwhile, BC played host to confusion—and caretaking. Eagle EMS (EEMS) student volunteers were already on duty on Newton Campus, Brighton Campus, and in the Mods. Two teams were stationed along the route, and five or six EMTs were staffing the first-aid tent in front of St. Ignatius.

The EEMS members began to get reports of the bombings through police channels soon after the bombs went off downtown. “At that point, there was still a lot of confusion as to how many bombs, what was going on, what the damages were,” said Alex Warshauer, president of EEMS and A&S ’14. The volunteers kept their operations running as planned, until BCPD notified them that the marathon route was being shut down at the BC campus, right in front of St. Ignatius—after Comm. Ave. was blocked off, the volunteers’ main concern became the health and safety of the runners. Emergency blankets were distributed and the doors of the church were opened for use as a shelter.

Passersby and students offered the use of their phones to runners. Cell phone service was working, for the most part, and the marathoners called their friends and families, letting loved ones know that they were safe. Like those in the BC community, many were struggling to process the information. “I’m just blown away,” said Wayne DelCorral, a runner from New Orleans, La. “Such a tragedy. Unreal.” While some were upset that their race had been halted, most runners at BC were more concerned with what had happened downtown. “It’s sad for the people who are affected by this, for sure,” said Dave Jimenez, a runner from Dallas, Tex. “The race is important, but hardly matters by comparison.”

St. Ignatius filled up, as runners from Mile 21 and from further down the route sought shelter. The Boston Athletic Association (BAA), which had a series of medical aid stations set up along the route, closed the aid stations near BC and brought the people there to St. Ignatius on buses. Around 400 runners ended up inside the church.

“With all the local ambulances being pulled into Boston, Eagle EMS assumed responsibility for the campus and surrounding area,” Washauer said. “We set up St. Ignatius as an emergency shelter and triage area for about 400 runners. With the help of 30 of our EMTs we checked out all of the runners, provided care for them, and kept track of bib numbers to get a count of how many people we had.” Off-duty EEMS members showed up to help out, along with nursing students and EMTs unaffiliated with EEMS.

A few runners who had abdominal pains were taken by a Newton ambulance to a hospital in the area, but most stayed in St. Ignatius to receive treatment for symptoms that included dehydration, low blood pressure, hypoglycemia, and slight hypothermia. “It was basically what we call a mass casualty incident, or an MCI,” said EEMS Director of Operations Gus Godley, A&S ’13, who worked as a supervisor on Monday. “Not all the injuries were extremely serious, but some were very worrisome.”

While EEMS was working to keep the runners healthy and calm, University officials were coordinating to ensure the safety of the campus. “The safety and security of students, staff and visitors are our top priority in any emergency,” said John Tommaney, director of the Office of Emergency Management and Preparedness. His office coordinated on-scene with BCPD, administrators, local and state public safety agencies, EEMS and Armstrong Ambulance, the BAA, the Office of Residential Life, the Dean of Students Office, Campus Ministry, Counseling Services, BC Dining, and Parking and Transportation, in order to manage the situation. “Extensive emergency plans are in place for managing Marathon Monday on campus and these plans are coordinated with the Cities of Boston, Newton, the Commonwealth of Massachusetts and the Boston Athletic Association,” Tommaney said.

UGBC president Chris Osnato, A&S ’13, reported at 5:20 p.m. that he had walked through the Mods, checking on residents, and had moved on to Campion Hall to help out at the Campus School. “We’re going to work through this, no matter what,” he said.

A scare broke out on campus when rumors began circulating that there was a bomb near St. Ignatius. While law enforcement officials were conducting searches of BC buildings and grounds to ascertain that there were no threats to the community, the rumor of a device on campus was unfounded. “What we can ascertain is that Fox TV national could have been the source—we tried to track down the rumor and called Fox TV Boston and they said they hadn’t reported it,” said University Spokesman Jack Dunn.

No emergency texts were sent out to the BC community on Monday. “We needed to ascertain accurate information before we could post anything to the BC community,” Tommaney said. “This last priority was a challenge as there were many conflicting reports from the media and others as to what was happening … While the concern for receiving faster and more detailed information is understandable, we must balance the speed of important information with accurate and actionable guidance to the BC community. We reserve the use of text messaging for direct threats to the Boston College campus.”

The Office of News and Public Affairs issued a statement about the bombing slightly after 5:30 p.m., stating there was no threat to the BC campus, but asking all members of the BC community to remain vigilant.

“Once it was decided that no threat existed to the BC campus, a decision was made to provide an informational update to the BC community through the established channels of BC Info, bc.edu, BC Facebook, BC Twitter, and then an email to all students, faculty, and staff,” Dunn said.

“This event is far from over.”

By 7:30 p.m. on Monday, BAA buses had taken most of the runners at St. Ignatius back downtown, into Boston Common, and the scene by St. Ignatius slowly cleared. Students who had gathered in Corcoran Commons to watch President Barack Obama address the nation dissipated, heading back to their dorm rooms. On Tuesday morning, classes resumed as normal.

While no BC undergraduates have been reported injured, a release issued by the Office of News and Public Affairs on the morning of Tuesday, Apr. 16, stated that two BC graduate students—Liza Cherney, GCSOM ’13, and Brittany Loring, BC Law ’13—were among those hospitalized for injuries sustained as a result of the explosions. Several BC alumni were among those injured by the bombings, as well.

At 5 p.m. on Tuesday, University President William P. Leahy, S.J., and Vice President for Mission and Ministry Jack Butler, S.J., held a Mass for healing and hope in St. Ignatius, where runners had sheltered less than 24 hours before. The Mass saw a significant turnout from the BC community.

“This event is far from over here and across the area,” Tommaney said. “Boston College will continue to provide needed services to our students, staff, and visitors as long as necessary to help them recover from this tragic experience. Counseling Services, Campus Ministry, Res Life and the Dean of Students Office are available to meet with any students who need assistance.”