By: Connor Farley
The Heights 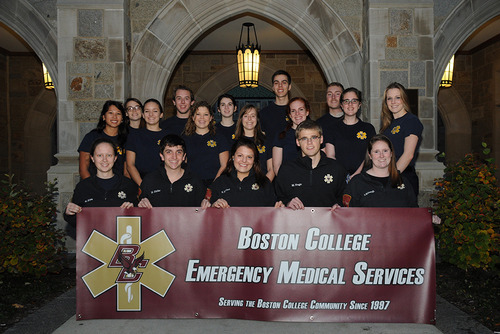 During the last Friday of October, a handful of students suited up in something other than a costume—a dark blue uniform outfitted with medical supplies and a radio—as they do for every weekend shift. The members of Eagle Emergency Medical Services (EEMS) were preparing for the Halloween weekend.

The University's student-run campus EMS provider originated in 1997 as a small ensemble of undergraduates equipped with only a few emergency medical supplies, and the organization has since grown to include an expansive network of medical services, educational classes, and its own emergency response, non-transporting ambulance, along with over 100 staffing members and around 20 executive officers and coordinators.

"Obviously the name 'Eagles' is super important in the hearts of BC students, but one things that's changed since 1997 is that we interact with a lot more outside agencies than we did back then," she said. "So, once upon a time, we interacted with [BCPD], and maybe we would work with Armstrong, but now we could be seeing anyone from Boston EMS, to [Newton EMS] Cataldo, to various different paramedics and police agencies who come from all over the area.

"We have much more exposure and we thought the name Boston College EMS better clarifies who we are now in 2014," DiBlasi said. "It associates us more heavily with the University—I think it represents a higher level of professionalism from the organization. So, Eagle EMS sort of sounds like a club, but Boston College EMS sounds like an organization."

DiBlasi also noted that she hopes the shift will help generate clarity and name recognition among hiring managers and admission counselors in the event that future BCEMS members apply for career positions beyond their time at BC.

Among other changes, the organization's emergency response vehicle is currently undergoing an exterior alteration that will reflect the new name shift away from EEMS, and a contest was held among members to redesign the BCEMS uniform patch.

Although the name change had been a long-proposed idea by EEMS members for several years, DiBlasi, a four-year EEMS member with previous EMS experience, said that the change became a focal point for the organization following its acquisition of an emergency response vehicle in 2012. The final push for the organization's new title was not initiated until returning to campus this semester, when EEMS officers convened to discuss the shift.

"It was sort of whispered for years—and it was some conversations I had with people in the police department and also just with the organization that made me think, 'Maybe this is the time—maybe we're sitting around thinking about it forever, but this might be the time to do it,"' she said.

Once a consensus was reached among the organization's officers, the idea was then extended to the more than 100 EEMS members at a town hall meeting, during which DiBlasi said the proposal received widespread support.

"I think [the proposal] was a little more compelling than an email," she said.

From the organization's formation up until the end of the 2013-14 academic year, the administrative relationship of EEMS was overseen by faculty advisor and former Dean of Students Paul Chebator, who retired from BC after nearly 35 years with the University last spring. EEMS also manages its relationship with the University alongside a four-member oversight committee consisting of BCPD Chief John King; Director of Emergency Management and Preparedness John Tommaney; Director of the Office of Student Involvement (OSI) Gus Burkett; and Associate Director of OSI Mark Miceli.

Given Chebator's retirement, DiBlasi said that the organization will begin entering into talks with incoming Dean of Students Thomas Mogan—who was named the new head of the Dean of Students Office (DOS) earlier this semester—to discuss the potential of a new BCEMS faculty advisor. During that interim period, BCEMS will rely on the oversight committee for administrative relations, and consulted the committee on the name change prior to enacting it.

"We wrote a proposal so that the administration had something to read, and everybody was just on board with it, [and] understood our reasoning," DiBlasi said. "It seemed like the appropriate change, and it was actually much easier than expected."

The name change to BCEMS also coincides with the beginning of the annually held National Collegiate EMS week—a seven-day schedule of college- and university-based EMS organization events sponsored by the American College of Emergency Physicians.

DiBlasi noted that although EEMS hasn't been as active in National Collegiate EMS as other university EMS organizations in years past, she said that BCEMS plans to unroll a comprehensive list of activities oriented for student awareness during that week, one of which is titled "One Too Many: Demystifying Alcohol Incidents at Boston College"—an awareness lecture headed by BCEMS and co-led by BCPD, the Office of Student Conduct, and the Office of Health Promotion.

During the spring semester, BCEMS is also slated to the attend the National Collegiate EMS conference in Baltimore, Md.

About the author: Connor Farley is the news editor for The Heights and is clinically obsessed with Phish.