With responders' fast reaction, a graduate's father survives a heart attack at Commencement
By Caleb Daniloff 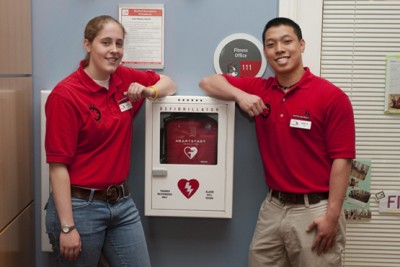 "I figured I'd just be handing out Band-Aids or something," says Su (MET'11).

About halfway through the ceremony, he and fellow EMT Elizabeth Snow (CAS'11) noticed a commotion across the arena. Then the announcer stopped reading names and called for a physician. The pair rushed over with their first aid kit, oxygen tank, and automated external defibrillator (AED). The father of a graduate had collapsed.

A Boston University police officer, a physician who happened to be attending Commencement, and the man's family were on the scene. "The patient was lying down, unresponsive," Su says. "I checked for a pulse and he didn't have one. We immediately identified it as cardiac arrest."

Snow radioed for an ambulance. Su and the doctor began CPR. That failed.

"In these situations, everyone else was panicking, so even though you're nervous, you have to stay calm and think on your feet," Su says. "Everyone is looking toward you to do something."

One of those people was the man's daughter, Heather Field (CAS'09), who was graduating that day. "I had just lost my mom a year and a half ago," she says. "I actually thought I was going to lose my other parent."

Snow fired up the AED and the physician applied the "paddles" many of us have come to recognize as part of an emergency responder's apparatus. The machine analyzed Field's heart function and recommended a shock to help restore normal rhythm. Su administered it, and the team continued with CPR.

Within a minute, Kevin Field's pulse returned and he began breathing on his own. By the time paramedics had arrived and he was strapped into the stretcher, he was talking. The water district auto mechanic from Sun City, Calif., was taken to Brigham and Women's Hospital, where surgeons later implanted a pacemaker. He was scheduled for release today. The last thing Field recalls is snapping pictures of his daughter receiving an award.

"Then I remember leaving the stadium to answer my phone and walking up the steps and that's about it," he says. "I never did get a chance to meet the EMTs that brought me back. I'd like to shake their hands."

Each year more than 300,000 Americans experience sudden cardiac arrest, and 95 percent of them die, most within minutes. For every minute that CPR is not provided, a victim's survival rate is reduced 7 to 10 percent, according to the American Heart Association. The last heart attack that occurred at a BU graduation was in 1992, Emergency Medical Services reports.

"Most of the stories I hear about people doing CPR usually end with the patient not making it," says Su, who took the EMT course at FitRec last year and recertified this past January. "It was a big sigh of relief — for all of us, for the family members. It was pretty chaotic. When we saw that he was going to make it, it was a pretty good feeling."

Field says he'd been suffering from bronchitis the past two weeks, but had felt fine that morning. Beneath the surface, though, his heart's electrical activity had become disordered and the lower chambers, responsible for pumping, contracted in a rapid, unsynchronized way, fluttering rather than beating. Little or no blood was being pumped. He fell against the wall. Death was minutes away.

"If my dad had been anywhere else, I don't know that he would have made it," says Heather Field. "We feel very fortunate. Very, very grateful."

Snow, who has worked for Emergency Medical Services for a year and covered last year's Commencement, says the most serious condition she'd ever faced as an EMT was a possible fractured ankle.

"To go from that to someone who's not breathing and doesn't have a pulse was a big jump," she says. "I was definitely kind of panicking on the inside, but just tried to do what I was trained to do. I felt prepared. It was good reinforcement that this does work and I'm doing it for a reason. To have such a positive outcome is fantastic."

As for Su, she has nothing but praise for the newbie. "He was so calm and handled it so well. I don't know what I would have done if this was my first patient ever. I probably would have really freaked out. He was pretty much a rock star in all this."

Caleb Daniloff can be reached at cdanilof@bu.edu.