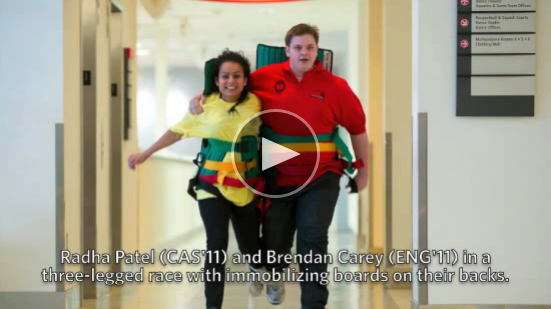 At first glance, nothing seemed amiss at FitRec on a recent Friday afternoon. Joggers ran off the stress of a long week. Students battled the elliptical machines. And teams were playing endless rounds of pickup basketball.

Yet, unbeknownst to them, lives were being saved at a breakneck pace throughout the building. Well...sort of.

Boston University's Emergency Medical Services (EMS) was hosting its second annual Yankauer Games, a type of Olympics pitting collegiate EMT programs against one another while testing their lifesaving skills. There are no gold medals here, though. The prize is a lot more modest.

"The promise of free T-shirts and pizza is a huge draw," said Aaron Gettinger (CFA'11), supervisor of EMS operations and an event organizer.

"It's a way to bring everyone together and form camaraderie, to see how they do things and talk about it, and to build friendships," said Zach Hahn (CAS'07), the University's EMS manager.

BU's team took third place against colleagues from Tufts, Brandeis, and Worcester Polytechnic Institute in a series of four exercises—each one slightly more difficult (and confusing) than the last.

FitRec's lower floor was the site of the first physical challenge, which involved both a leg race and a climbing wall. The smell of sweat and chlorine filled the space. Some friendly verbal sparring began before the first racers even left their mark. EMTs from different schools know each other, as they work for the same ambulance companies or teach BU's EMT training courses.

"Break a leg," said Christopher Libby (CAS'11), a BU EMT instructor and one of the event's judges, to Tufts University junior Josh Kapelman. "Like really, break a leg."

In the first event, Radha Patel (CAS'11) and Brendan Carey (ENG'11) ran a three-legged race, finishing the second half with an immobilization board strapped to their backs. They tagged off to teammates Marcos Villarreal (CAS'13) and Brittany Phillips (ENG'11). Villarreal climbed the rock wall. His goal? To snag as much CPR equipment dangling from wall grips as possible, while Phillips performed continuous CPR on a limbless manikin.

All the teams finished the first event well within the 10-minute limit, with BU coming in under 3 minutes.

Explaining the second event took almost as long as completing it. Teams were to go on a scavenger hunt for various medical items, such as padded board splints and gauze, return to the third floor track, strap a volunteer to a chair, run their "patients" to the other side, and then properly attach each item from the scavenger hunt.

Gettinger gave the instructions, then sent teams off: "Go save lives!" No one moved. They needed the complicated directions explained one more time before launching their search.

BU didn't fare well during that round. Cardiovascular training, they said, could've given them a boost.

A dinner break allowed everyone to refuel. While students munched on pizza, Gettinger scrolled through a YouTube best-hits list of EMT-related videos. (Who knew?) One EMT requested a Brandeis Emergency Medical Company film titled State Your Emergency, set to the tune of "Eye of the Tiger."

The third exercise was a true sensory challenge. Two team members on each squad were blindfolded during a simulated medical emergency; one was not permitted to talk and the other could speak only to give instructions. The BU team had to patch up a motorcycle accident "victim" with a broken forearm, arterial bleeding, and an inhaled mosquito.

The games ended with an event that could have been dubbed Impaired Pictionary. Competitors drew EMT-related pictures with a dry-erase marker attached to the end of a giant padded board—a task about as easy as coloring a stamp with a fat-edged Sharpie. The topics they illustrated—antivenom, sample history, and hypoglycemia—hardly made the job easier.

At the end of the day, BU may have finished behind Brandeis and WPI, but no one would have guessed by the group's cheers.

"We beat Tufts," Carey said. Apparently, that's all that mattered.

BU offers summer EMT training classes on Tuesdays, Wednesdays, and Thursdays, 6 to 10 p.m., from May 31 to August 2. Registration ends on May 30.