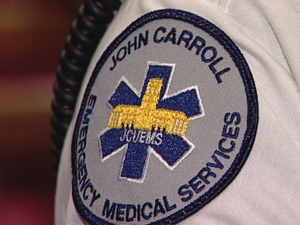 More and more colleges are starting up student run EMS squads and now they're all learning how they might react in a similar situation.

John Carroll University's student EMS squad started five years ago after a student collapsed from a heart attack at a pick-up basketball game.

The young man died and other students wished there was more they could have done to help.

That's when the EMS squad was formed.

The majority of the 55 members are studying to enter the medical field.

They cover the hours of 3pm to 9am daily and answer nearly 130 calls a year according to Chief Tom Albani.

The Virginia tragedy was a sobering reminder that they potentially could face a similar situation.

Case Western Reserve's Student EMS squad is only two years old and has 40 members but there's 50 on a waiting list to join.

Chief Larissa Shnayder, an economics major, says her crew may be unprepared for a mass casualty event.

They only cover weekends and just half of campus.

However, they've seen a 46% increase in calls this year.