Volunteers are sought to play role of patients 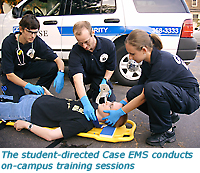 If a fiery explosion, massive accident or other major disaster strikes campus, would you be prepared? The Case Western Reserve University community will take part in its first mass casualty incident drill at 8 a.m., Saturday, December 8, organized by the student-led Case Emergency Medical Services (EMS).

The catastrophic scenarios, while not preventable, are manageable if handled properly and quickly by first responders to the disaster scene.

The drill is a valuable training tool used by emergency responders to prepare for what is termed Mass Casualty Incidents (MCI)—accidents or disasters that exceed the amount of resources available by local departments to handle the amount of patients.

Case EMS, started by students Joseph Grover and Ari Rabkin during the 2004-05 school year, is a student-run campus emergency responder program. Case EMS provides coverage to the entire campus every evening and weekend and provides EMS standby for large-scale events.

The group is currently seeking volunteers to serve as both patients and bystanders during the mass casualty incident. "People of all ages get hurt in an emergency," said Grover, organizer and past Case EMS chief.

Volunteers will act as "victims" who "suffer" injuries ranging from minor cuts and bruises to lacerations, burns and contusions. Other "bystanders will be asked to assist responders as if they would in an actual situation.

"A drill like this is a great way to test if we are prepared for an unfortunate real-life event and practice for the future," said Grover, who is a first-year student at the Case Western Reserve School of Medicine. "Being able to work with all the different departments and see the large community involvement is a great plus."

The event consists of three drills in one. The first drill will involve police and emergency medical service agencies responding to an "explosion" of a propane tank in Adelbert Gymnasium during a concert. The staged explosion, caused by a faulty propane tank used by food vendors in the concession area, leads to a small fire and an unknown number of casualties.

The second drill, occurring concurrently with the response, treatment and transport of patients from Adelbert Gymnasium, involves the university administration's emergency response team and its reaction to this mass-casualty incident, including the setup of an incident command on campus.

The MCI drill not only provides a valuable learning experience in preparation, but will also demonstrate the collaboration among the local agencies.

"Every agency or department works differently," Grover said. "By practicing with a drill of this magnitude, everyone can become familiar with their different roles and be prepared to work together in a time of crisis."

Organizers note that most schools' emergency service groups do not have the opportunity to practice response to a major disaster and are ill-equipped should such a calamity occur.

"The goal is to take a realistic scenario which we might see on our campus, but something of the magnitude that requires us to reach beyond our means," said Brian Hurd, associate director of campus security. "This drill allows us to communicate and coordinate with all of the different groups responding, build relationships with them and see what resources are available to us. Then we can take a careful and critical look at ourselves and see where we can become more efficient."

"Experience and practice are the best ways to be prepared," Grover said.