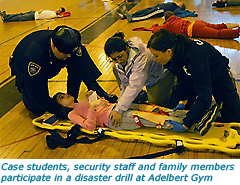 Students, faculty and staff who have yet to subscribe to the alerts -- that will be used, among other methods of communication, only in the case of imminent danger or a serious threat to the campus community -- can do so at any time. Those who previously subscribed to the alerts but are no longer with the university, will need to login to the CaseWARN notification page to turn off the alerts. In addition, subscribers must update the system if their phone numbers or cell carriers change.

The training event this past weekend consisted of three separate drills, all of which were conducted with minimal errors, after campus police set off a firecracker in a trashcan inside the gym to simulate an explosion and fire during a concert. The main issues encountered and quickly corrected dealt with communication among the varied responders at the scene.

The second part of the training, occurring concurrently with the response, treatment and transport of patients from Adelbert Gymnasium, involved the university administration's emergency response team and its reaction to this mass-casualty incident, including the setup of an incident command on campus and use of the CaseWARN rapid notification system.