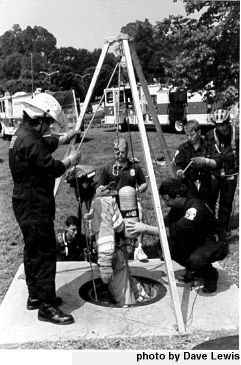 A rescue operation in a confined space is just one of the many scenarios University firefighters regularly practice. Kim Santos, left, and Mike White, right, lower Scott Savett, suspended from a tripod and wearing a self-contained breathing apparatus, into a manhole at the corner of Williamson and Perimeter roads during an OHSA-mandated training exercise. Assisting in the background, left to right, are John Choberka, Brady Grim, Richard Manley and Jimmy Timms.

These techniques could be called on should an employee become trapped in a storm drain or other confined workplace. "Some of the areas around the boilers in the steam plant are barely 14 inches across and workers have to go in to maintain them," said Santos. "We have to make sure we could get them out in an emergency."

Current staff members train throughout the year but a rookie school for aspiring firefighters is planned for July 29-Aug. 9. Fire Chief Lew Riley said he is especially interested in student applicants. The department has employed students before -- Savett and Choberka, pictured above, are students -- but Riley plans to incorporate them more fully into the schedule. "They will work a 24-hour shift just like the other firefighters," said Riley. "It's a good part-time job for interested, motivated students."

Call Chief Riley at 864-656-2322 for more information on the rookie school or other issues concerning the fire department.