Emory EMS conducted its annual Mock MCI Drill on April 3rd, 2008 at Druid Hills High School. The drill, facilitated by EEMS Chief of Operations Jim Chung, brought together multiple EMS services in Dekalb County as well as the students of Druid Hills High School. "The purpose of the drill", said Chung, was to "both prepare our medics for a real MCI and to educate the community on the dangers of drinking and driving." 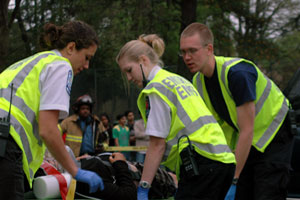 The drill began when two cars simulated a crash. Each car had at least three patients (students of Druid Hills High School) inside, with injuries ranging from a broken arm to death. Speakers were set up around the football field so the students attending were able to hear all of the radio traffic during the incident. Emory EMS units 795 and 796 were "first on scene" of the accident and began triaging the patients according to the protocols in place for the Unit. Upon recognition of the MCI, Unit 795 medics Alex Amaducci and Danielle Smith requested assistance from Dekalb County Fire Services and advised Emory dispatch to page the chain of command. Shortly thereafter, Engine 1 and Rescue 1 arrived to provide ALS support and extrication equipment for the incident. Meanwhile, Emory Police officers gave a sobriety test to the drunk driver, who only sustained minor injuries in the crash.

As the students and faculty of Druid Hills High School watched the incident, they were able to appreciate the reality of such a serious situation. "It was really eye-opening for us to see the dangers associated with alcohol," commented one student.

Emory Flight arrived minutes later, landing on the center of the football field. They transported a simulated critical patient to Grady Memorial Hospital, the Level I trauma center in downtown Atlanta.

The event was a huge success. Especially relevant to collegiate EMS services that often work with county EMS or fire rescue, a drill such as this highlights the importance of communication and incident command. Learning how each EMS system operates in an MCI is critical in coordinating an effective and efficient protocol for real life situations.