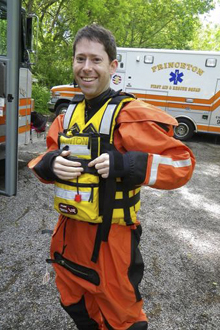 While trying to save a life, Michael Kenwood ’94 lost his own.

The former director of the Brandeis Emergency Medical Corps (BEMCo) died attempting a swift-water rescue during Hurricane Irene on Aug. 28 in Princeton, N.J. He was 39.

Kenwood was remembered as a dedicated family man and committed emergency responder during his funeral on Aug. 31 in Paramus, N.J. Along with family and friends, attendees included more than 100 police, fire and emergency service personnel, New Jersey Lt. Gov. Kim Guadagno, and Princeton Mayor Chad Goerner.

"Michael is a hero," former BEMCo co-worker Peter Simon ’94, the president of the Princeton First Aid & Rescue Squad for which Kenwood volunteered, said during his eulogy, "not for how he lost his life, but for how he lived it – for how he volunteered to make his community better, for how he served our squad, and for how he loved his family and friends."

Simon and Kenwood met while volunteering for BEMCo, which Kenwood led as director in 1993 and 1994. They became friends and shared a suite during their junior and senior years. They reconnected when Kenwood relocated to central New Jersey.

"Michael was thoughtful, insightful, intelligent and a straightforward guy," Simon said at the funeral. "No pretenses. No politics. No BS. You could tell when Michael enjoyed something by the smile on his face and the eagerness with which he talked about it. Emergency services was one of the joys of Michael’s life."

According to an account in the Times of Trenton newspaper, Kenwood and a fellow member of the rescue squad entered a rapidly rising brook around 4:35 a.m. on Aug. 28 to check on a submerged vehicle, which authorities believed was occupied (it had been abandoned).

As they approached the car, Kenwood and his fellow rescuer were called back to land because the current was too strong, the newspaper reported.

Kenwood was subsequently swept into the current. He was pulled unconscious from the waterway farther downstream and then transported to University Medical Center at Princeton, where he died. Kenwood had his own company, Kenwood Technical Consulting. He earned a law degree from Boston University. He lived with his wife, Elizabeth Frenkel, and 3-year-old daughter in East Windsor, N.J.

"We are deeply saddened to receive the news that Michael Kenwood, former BEMCo member #125 and alumnus of the Brandeis Class of 1994, lost his life in the line of duty in New Jersey during Hurricane Irene," Paul Schneider '12, BEMCo’s director, said in a statement. "Remembering Michael's legacy, we caught a glimpse of his personality and contribution to the organization. It was evident to us that Michael was an exemplary EMT, consistently putting the well-being of others before his own. EMTs such as Michael remind us of why we serve our community in times of emergency. Michael embodied the qualities that all BEMCo members strive to uphold, and we are proud to wear the same uniform that he wore during his service on BEMCo."

Ed Callahan, Brandeis’ director of public safety, recalled working with Kenwood. "He was a very dedicated, professional individual who was committed to serving the Brandeis community," Callahan said. "It’s a tragic situation." 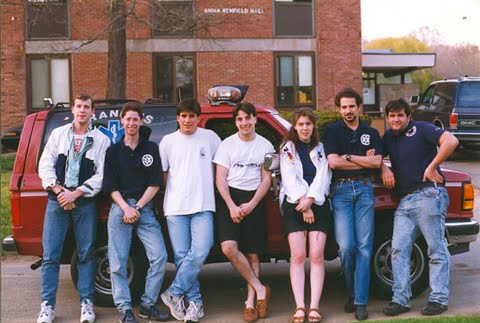 In May 1990, a few months before enrolling at Brandeis, Kenwood was involved in a car accident that changed the course of his life. He shared the story of his epiphany in a 1993 letter supporting his candidacy to serve as BEMCo’s director.

"I will never forget the feeling of fear and helplessness that swept over me as I looked from my two friends, one of whom was unconscious, to the hysterical driver of the other car, to my right wrist, which was deeply lacerated and bleeding heavily," he wrote. "I swore to myself that if I lived, I would learn the skills to care for myself and others should another medical emergency ever confront me again. "Being a member of BEMCo has been highly significant for me," he wrote in the letter. "From the most basic medical perspective, it’s given me the chance to apply and to share my skills as an EMT. Beyond that, I’ve met some wonderfully talented and dedicated people. Finally, it’s given me countless opportunities to grow as an individual."