ATLANTA — More than 1,000 students line a college gym floor, hunched over and pumping the chests of inflatable dummies as they practice breathing techniques.

Welcome to freshman orientation at Emory University, which includes the usual wandering tours of campus, student clubs hawking their causes and — in what's believed to be the largest program of its kind — CPR training. The school aims to have every one of its 12,000 students trained in basic lifesaving techniques in the next few years.

Health officials and university administrators say having a concentration of students familiar with CPR means anyone who has a heart attack while wandering through campus has a greater chance of surviving. Starting CPR just after a heart attack — even before paramedics arrive — can greatly increase the odds of survival.

"If there's an incident and there are a few people there who were trained, we could actually save a life," said Bridget Guernsey Riordan, Emory's dean of students. "You never know with somebody what their health situation might be."

Many colleges across the country — from the University of Pennsylvania to Rice University in Texas — offer some CPR classes for students, but none has ever had such a large training session, according to the National Collegiate EMS Foundation.

Emory's class was organized by the university's student-run, volunteer emergency management services squad with the help of the American Heart Association, which donated hundreds of CPR kits with inflatable dummies.

The EMS squad gets five or six calls each year for people having heart attacks or other cardiac problems on campus, she said.

The training is voluntary, though most students attend. And the students don't earn a CPR certificate but do learn the basic skills needed in case of an emergency.

During Sunday's training at Emory, Brian Oliver quietly focused on his dummy, listening as the instructor talked about how best to position a heart attack victim's head.

"It's a pretty useful thing we should all know how to do," said Oliver, who is from Atlanta. "It would be helpful for every freshman in any college."

For Emory freshman Amanda Fernandes, 18, the training helped her brush up on the CPR class she took during the summer at home in Houston.

"It gives you a sense of security, like I can say, 'If something happens to me, she'll be there to help me,'" said Fernandes, who hopes to major in neuroscience. "There are so many people so close to each other on campus. You have to help each other out." 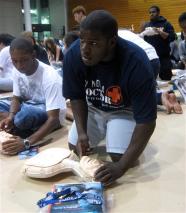 In this photo taken on Aug. 23, 2009, Emory University freshman Andre Lumpkin learns basic CPR techniques along with more than a 1,000 other classmates during a mass training. Emory University hopes to get every student trained in basic life-saving skills. (AP Photo/Dorie Turner)